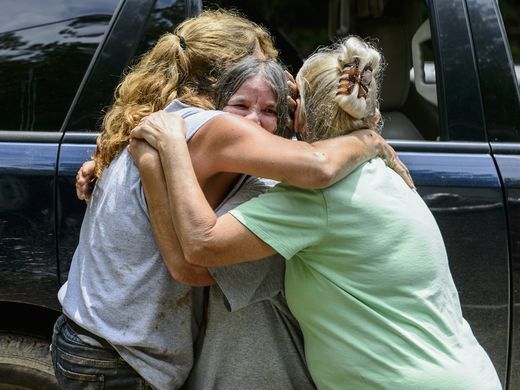 The bodies of three more victims of West Virginia’s historic flooding were found overnight Saturday, according to county authorities, raising the death toll to 26 from torrential rains and high water that has destroyed more than 100 homes, washed out scores of roads and bridges and knocked out power to tens of thousands of people.

On Saturday, President Obama declared a major disaster for West Virginia and ordered federal aid to supplement state and local recovery efforts in the counties of Greenbrier, Kanawha and Nicholas.

The Kanawha County sheriff’s office said Saturday that one man was found in a home in the Clendenin area and two females were found in a home along the Elk River. The officials said it is presumed that all three had drowned.

At least 23 others, including an 8-year-old boy who was wading in a foot of water, were killed in the torrential flooding after as much as 8-10 inches of rain fell in six to eight  hours in parts of the state on Thursday, according to the National Weather Service. This amount of rain in such a short time is likely a “one-in-a-thousand-year event,” the weather service said.

It was the third-deadliest flood on record in West Virginia, according to the West Virginia state climatologist Kevin Law. Only the Buffalo Creek flood in 1972 (when 125 died after a dam break) and a November 1985 flood (when 38 died from a combination of Hurricane Juan’s remnants and another storm) killed more in the state, Law said.

Gov. Earl Ray Tomblin told reporters Friday that damage is widespread and devastating. Saying search and rescue missions are still a top priority, Tomblin issued a state of emergency for 44 counties and deployed 150 members of the National Guard to help emergency responders.

He called the flooding “among the worst in a century” for some parts of West Virginia. 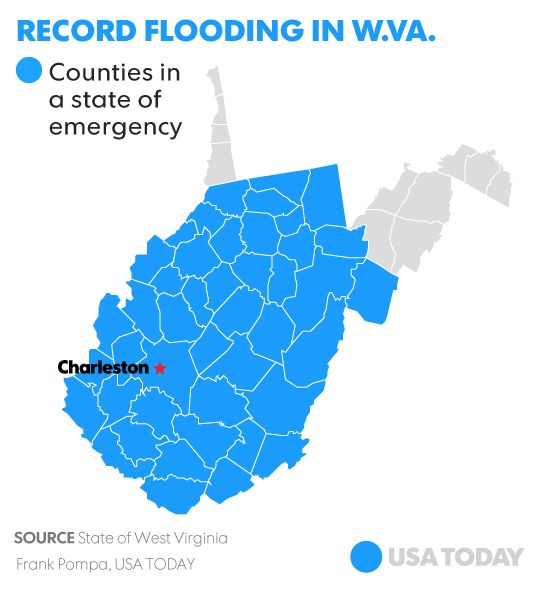 Tomblin’s chief of staff, Chris Stadelman, said 14 deaths had been confirmed by the state medical examiner. But local sheriffs and rescue workers across the state confirmed others not yet included in the state’s official tally, the Associated Press reported.

Sheriff Jan Cahill of Greenbrier County, one of the hardest-hit areas, said at least 13 were killed there. Three were killed in Kanawha County and one each in Ohio and Jackson counties.

The heavy rains and rising water swamped towns, inundated a two-century old resort and trapped 500 people in a shopping center when a bridge was washed out. The storm also knocked out power to 66,000 West Virginians, and forced the shut off of gas in the town of White Sulphur Springs, Tomblin said.

The governor said 60 roads were closed, many of them destroyed, bridges were knocked out,  and homes were burned down and washed off foundations. He said water rescue teams searched devastated areas looking for possible victims.

Greenbrier County Sheriff Jan Cahill described “complete chaos” in his county from the flooding, according to the Associated Press.

Chris Stadelman, the governor’s communication director, said some areas were “probably looking at flooding that’s going to be the worst in 100 years.” Tens of thousands of people were without power, and several roads were impassable, the Associated Press reported.

The body of   Emanual Williams, 8, was recovered in Big Wheeling Creek in the Elm Grove area of Wheeling, The Wheeling Intelligencer reported.

The newspaper said the boy was walking with his sister and mother in a foot of water in the creek when he slipped and was carried away by strong currents.

One of the 500 people stranded overnight at a shopping mall said rescuers used a rope to help him and others down a steep slope behind the Crossings Mall in Elkview, about 12 miles from Charleston.

Eric Blackshire, who is 48, said that he decided to get a hotel room at the mall on Thursday because a rock slide had blocked his way home to Walton. Then the bridge to the mall washed out during heavy rainfall, stranding people there overnight.

In Nicholas County, much of the town of Richwood was inundated by high water from the Cherry River, forcing the relocation of a nursing home. In nearby Greenbrier County, the grounds of the 238-year-old Greenbrier Resort, a National Historic Landmark, were partially flooded by water from Howard’s Creek.

“We’ve got houses washed away, people trapped in automobiles and people trying to swim to get out of harm’s way,” Jim Justice, owner of the resort, said on MetroNews Sportsline. “It’s really, really, really bad.” 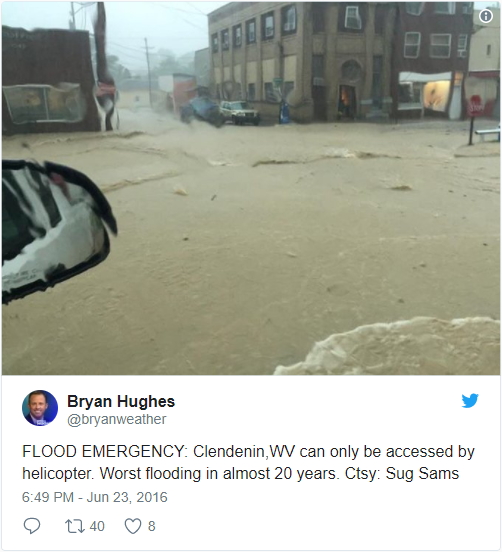 One river, the Elk River at Queen Shoals, West Va., rose to an all-time record height of 33.37 feet, breaking the previous record of 32 feet, set in 1888, the weather service reported.