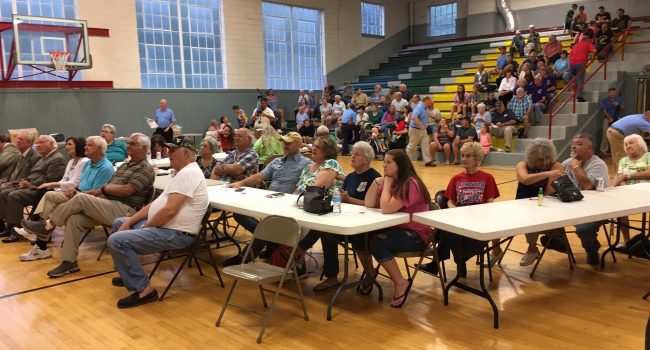 CLENDENIN, W.Va. — For Clendenin Church of the Nazarene Pastor Charles Larue, the recovery efforts stemming from the June 2016 flood deserved celebration on the one-year anniversary of the storm.

“God’s gracious,” Larue said. “The reason so many lives were spared was because of the grace of God.”

That is why the Clendenin Ministerial Association — which Larue serves as vice president — organized a celebration event Friday. Residents came to Clendenin Middle School to listen to gospel music, eat free food and enjoy an evening with their neighbors, many of whom went through similar circumstances.

The last year for Clendenin has not been easy; homes and stores were destroyed after the Elk River spilled over its banks. Six people died during the flood. Clendenin Elementary and Herbert Hoover High schools were closed permanently.

Clendenin Town Councilman Sidney Oliver said in his 77 years living in Clendenin — his entire life — he had never seen anything like what happened on June 23, 2016.

“I live behind Smith’s (Foodfair), where Big Sandy (Creek) comes out and the Elk comes down,” he explained. “I lost a brand new car and a good truck, but nothing happened to my house.” 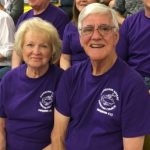 Oliver’s daughter was not as fortunate.

“She lived on Koontz Avenue and it was five-feet deep in her living room,” he said. “She’s OK.”

But it is what happened after the flood that has remained with so many residents. Local and national volunteer organizations came into the town to donate time, supplies and food.

“We’ve had people as far away as Massachusetts to come in here are work on houses and stuff,” Oliver said. “I know one day there was 29 people working on my property, and I couldn’t have done (the work) in 10 years.”

Renee Lepley said the flood drove neighbors together, including two people she knows who “didn’t really like each other.”

“After the flood, they became very good friends,” she said. “People have pulled together and worked together. People who didn’t know each other now do.”

Oliver also mentioned how Clendenin is rebounding as businesses open their doors.

“They only thing we don’t know is if Smith’s is going to come back, which we need bad because we don’t have no grocery stores,” he noted.

When asked where the closest grocery store is located, Oliver said “Elkview,” 10 miles south of the town. 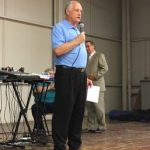 Larue said Clendenin churches also were instrumental in helping people in need by providing food, clothes and building supplies, which is expected to continue.

“We turned our gymnasium and fellowship area and all of that totally over,” he explained. “Actually looked like a Walmart without a cashier.”

And it is those moments, for Larue, why coming together Friday night was important. It was an evening of remembering not the tragedy of the June 2016 flood, but the unity and perseverance that pulled Clendenin together.

“Many people, including myself, lost pretty much everything that we owned,” he said. “Through generous donations from churches and other people, we were made whole again. In a lot of cases, things are better than it was before again.”

A remembrance ceremony is planned for Saturday at Herbert Hoover High School to honor those who died in the flood.

Alex Thomas joined MetroNews in January 2017 as a reporter/anchor. He holds bachelor’s degrees in political science and broadcast journalism. Alex can be reached via email alexander.thomas@wvradio.com.