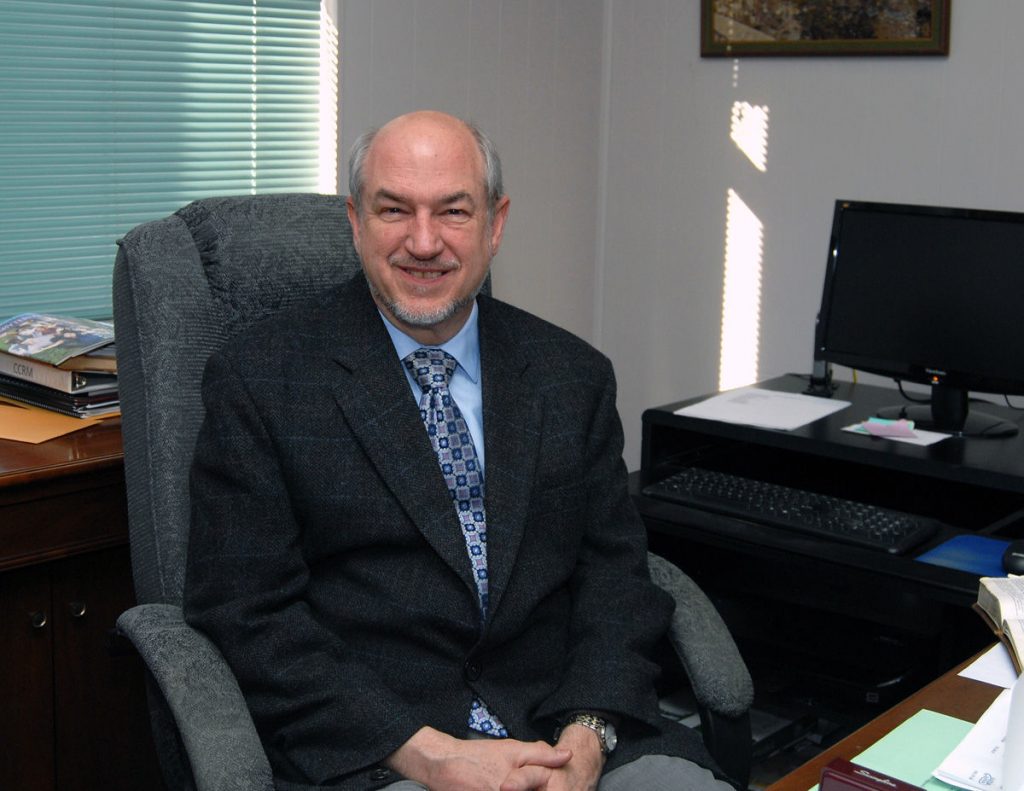 Pastor Paul Romine of the First Presbyterian Church of St. Albans is retiring later this month after 15 years at the helm of the historic church on Kanawha Terrace. The church is planning a celebration of his tenure on Sunday, Jan. 28, at the church.

Pastor Paul Romine’s eyes seemed to glisten slightly as he talked about missing the mountains.

They moistened a bit more when he talked about missing the people.

Romine, pastor at First Presbyterian Church of St. Albans, is retiring later this month after 15 years at the helm of the historic church at 201 Kanawha Terrace.

After nearly 40 years in the ministry, Romine has decided to retire and move with his wife, Julie Simon, to Lawrence, Kansas, to be near his son and grandchildren.

Romine came to First Presbyterian Church in November 2002. Prior to his arrival, he was a part-time pastor at a Presbyterian church in Cincinnati.

“I had been there 10 years before I came down here,” said Romine, who was born and raised in Cincinnati.

Before arriving in St. Albans, most of Romine’s career in the ministry was spent at Presbyterian churches in Ohio and Indiana.

It was when Romine was in high school in Cincinnati that he decided to enter the ministry. His youth pastor at his church influenced his decision.

“He saw something in me that I didn’t see and kept encouraging me to go into the ministry. He would take me with him on hospital calls and got me active in the youth group. He was quite a craftsman — he took youth on work camps, and that was kind of a life-changing experience,” he said.

Romine graduated in 1979 from the University of Dubuque Theological Seminary in Iowa.

Romine wound up at First Presbyterian Church of St. Albans when he was “matched” with the church.

Previously, he had been a “halftime call” pastor at a church in Cincinnati, where he was doing alcohol and drug recovery work.

“I started as a chaplain and became a case manager, and after doing that for 17 years, I kind of burned out,” he said.

Eager to find a “full-time call,” Romine was matched with First Presbyterian Church of St. Albans.

“The Presbyterian Church has an elaborate system of matching pastors with churches that are looking — it’s kind of like a computer dating system. I was eventually matched with this church.”

Before accepting the post, he and his wife made a “stealth” visit to St. Albans to check out the community.

He liked what he saw. As a railroad enthusiast, he was impressed with the historic C&O train depot on Fourth Avenue. And as a Bluegrass music fan, he was pleased to see the Fret ‘n’ Fiddle shop near the church.

And the church itself impressed him.

He thought to himself: “I could probably live here.”

“So I had a favorable impression of West Virginia,” he said. “I’ve really enjoyed my time here.”

Looking back on his time at First Presbyterian, Romine said he’s proud of the things he accomplished.

One of his goals upon arriving was to kick-start the church’s youth group.

“I hired a youth director, and we had a very active youth group for a number of years. I enjoyed being a part of that.”

Romine was also active in the community.

“I joined the St. Albans Ministerial Association, and that was back in the days when there were only three or four pastors coming to meetings. I kind of guided that group into becoming a larger, more functional group, with a goal of community service rather than being a support group.”

Another thing Romine is proud of is his church’s involvement with the St. Paul Community Economic Development Corporation.

“We also partnered with the West Virginia Ministry of Advocacy and Work Camps. We did local work camps helping low-income and elderly people who own their own homes, but couldn’t afford materials or labor.”

“We’re ideally situated to help with Clendenin. We had 17 work groups last year that came and stayed with us and went up to Clendenin to work.”

Romine said he would miss the mountains of West Virginia and the people of St. Albans.

“It’s going to be hard — these are wonderful people. They are warm and supportive. It’s been a delight to be their pastor.”

Metro reporter Ben Calwell can be reached at bcalwell@cnpapers.com or by calling 304-348-5188.