The Jim C. Hamer Company is a leading producer of hardwood products with locations throughout West Virginia and Kentucky. Our employees are given the tools and opportunities to maximize their talents and achieve professional success. We are seeking an experienced and hardworking Maintenance Technician for our Amma, WV location.

What You Will Do: 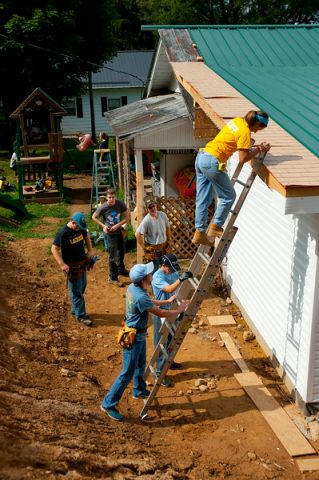 The Appalachia Service Project will be working in Clay County from June through July. Home Repair Applications are due before May 29.

Appalachia Service Project (ASP) is a Christian ministry open to all people, that inspires hope and service through volunteer home repair and replacement in Central Appalachia. END_OF_DOCUMENT_TOKEN_TO_BE_REPLACED

HUNDRED — Floods seem to be a fact of life in West Virginia the past several years, but one city official who has seen his share of high water is sharing knowledge and supplies.

“If you haven’t been through it before it’s hard,” Hundred Mayor Charles Goff said. “You don’t know what the first steps to take are.”

Goff said when the July 2017 floods hit Hundred he was a first responder and lost a firetruck attempting to get to his family, who he didn’t hear from until 7 a.m. He said flooding is an emotional time and he personally lost three vehicles and his home was flooded.

Extra supplies are available to any organization with the infrastructure to give them to those in need, Goff said. Those interested should contact the Hundred Volunteer Recovery Center at 304-775-2575.

Goff also said he’s available to offer advice to those who need it. He said after his community was devastated, he visited Clendenin and White Sulphur Springs, in Greenbrier County, for advice on how to deal with flooding.

One suggestion Goff has is to hire a consultant to help with the process of getting money from FEMA, should there be enough damage to declare a federal disaster.

In the earlier months following the 2016 Flood, Kanawha County Commissioner, James Young, presented an economic development grant opportunity, through WVU, to the former Clendenin town administration. It was approved, applied for, and the grant was secured and passed on to the new administration when they took office.

On Wednesday, October 25th, 2017 they held their first meeting, which was facilitated by the WVU Law Department. An election of officers was conducted, and Kevin Clendenin was named President, and Jeanie Bird, Vice President. Discussions of timelines, scope, bylaws, and other issues took place. <See Agenda and other documents>

The Clendenin Planning Commission Meetings are OPEN to the public. You do not have to live within town limits to attend and/or participate in these meetings. Everyone in Clendenin and the surrounding area is encouraged to attend.