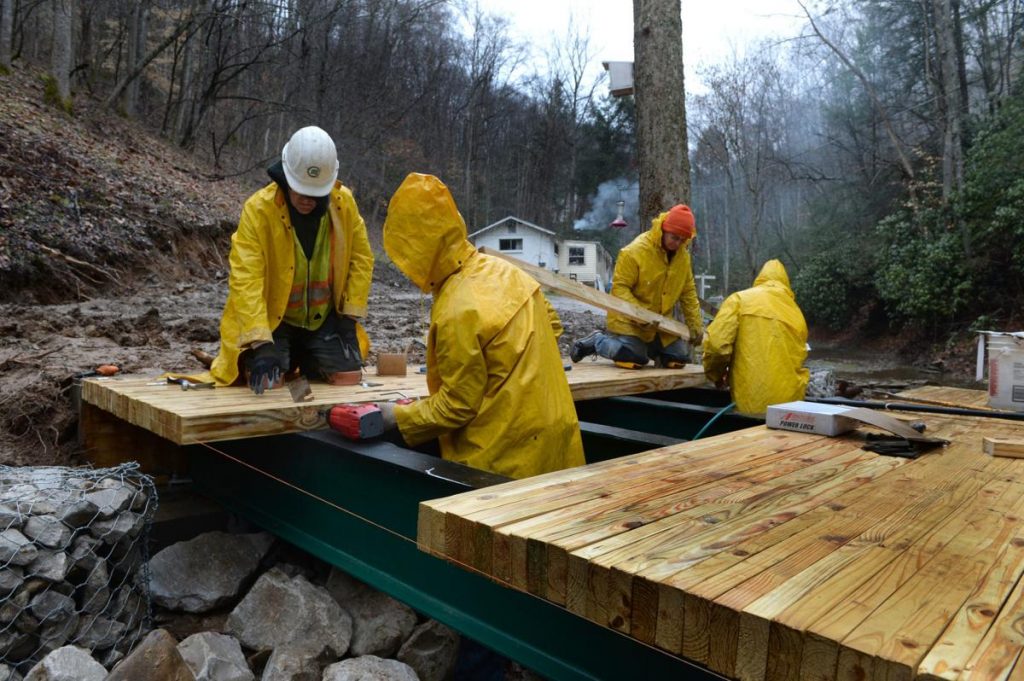 IVYDALE — Martha Adkins teeters across the creek toward her home, stepping on stones and balancing precariously on a metal ladder lying in the water. It is slippery from the ice crystals that have formed in the frigid air.

“Sometimes the water comes up and we have to wade through with rubber boots,” she said, adding that when the water is high enough, it seeps into the boots, soaking her clothes and weighing her down.

Robert Weese, who lives with her, struggles to carry the wood they’ll need for a fire. Pragmatic and practical — “You make do with what you’ve got” — his biggest fear, living as they do on the other side of a creek with a washed out bridge, is what would happen if either of them needed medical help again. EMTs, he said, would have to pack them out and back across the creek.

At 55 years of age and with a host of health challenges, Adkins isn’t as sturdy on her feet as she used to be. She’s come away bruised and bloodied from the trip more than once, most recently in mid-March — about a week before a crew of determined volunteers landed on her doorstep.

“When I fell coming down those steps I landed right there by the end of the ladder, on my face,” she said, then shrugged in resignation and offered a wry, tired smile. “You do what you gotta do.”

It wasn’t supposed to be this hard — but there is comfort at last in the knowledge that help is available for them and for hundreds of other West Virginians facing a similar plight.

“In March and April 2015, we had several floodings in the southern part of the state, which is the Lincoln, Boone, Logan, Mingo, Wayne areas. Every area you went into there’s a stream and most homes are across the creek. When the flash-flooding came, people’s bridges washed out,” said Jenny Gannaway, executive director of West Virginia Voluntary Organizations Active in Disaster.That left more than 500 families without a way to reach the neighbors, food and medical services in their communities.

Since then, the association has turned part of its focus to rebuilding lost bridges for those without the resources to rebuild on their own. They wanted structures that would withstand the force of floodwaters in the future, that wouldn’t wash away or break apart, forming unwanted dams that would push water upstream and flood properties. They also wanted bridges strong enough to hold ambulances and firetrucks, should they ever be needed.

Rather than just meeting local standards that might vary from one place to the next, they made a choice to also meet state and federal standards. That meant for each bridge securing up to seven different permits — from the Army Corps of Engineers, the Division of Highways, the Division of Natural Resources if there might be endangered species in the area, even a historic preservation permit if there was a question about Native American burial grounds.

They were ready to begin their first bridge by December 2015. That’s when they put out a call for volunteers that was heard all the way in Western Canada.

“What’s happening here is that we are preparing for a bridge,” Peter Thiessen said with a slight, almost British, accent. “We start with digging for footings and pouring concrete today, and letting that set in.”More than 2,000 miles from his home in Calgary, Alberta, he sounds right at home — perhaps because he’s done this kind of thing all his life.

“I concluded my career in construction and wondered where I should turn and this is what’s turned up,” he said. “Now I’m a director with the Mennonite Disaster Service. I do bridge relief here in West Virginia.”

“See those wire baskets? We fill them with 4 to 6 inches of rock. We do that to protect the footings, which is the problem with bridges. The footings get undermined and washed out and then they go down the stream. So we try to work hard to protect banks with rocks and gabion baskets so they’ll stay.”

He paused for a moment. “And we’re pouring concrete today.”

“Peter didn’t like sitting in Palm Springs on the beach. That wasn’t good for him,” said his wife, Susan.

Together, they travel to West Virginia for two months at a time, three times a year — as long as they can legally be in this country. With the help of VOAD case workers, they direct an ever-changing group of volunteers in building bridges in the flood-prone areas of the state. They work six to seven days at a time, and complete a new project — on average — every week.

“This is my retirement package,” Thiessen said. “It’s in my DNA.”

“The shortest bridge we’ve ever done is 12 foot, the longest is 90 feet, 2 inches in Mingo County. Families were walking up to a mile, taking their groceries home in wheelbarrows. Crazy stories, things that you take for granted every day, as simple as getting our mail. When the bridge was gone they had no access to just basic necessities,” said Benjamin Cisco, a program director with WV-VOAD.Bridges are expensive, he said, but the free labor helps make the cost manageable.

“It’s incredible to see volunteers come here from all over the country and build bridges for nothing, just to be able to give back in their way, and now to look and we’re looking at our 50th bridge,” he added, referring to the bridge for Adkins and Weese.

The new bridge, quite simply, allows them to make their home where their hearts are, Weese said. Despite the flood waters that forced them out of one house, despite the bridge that washed away from the next place, they don’t want to leave.

“I was born here. I got a brother that lives in Procious,” he said.

“All her family’s here. Her kids,” he added.

And that, Thiessen said, is what building a bridge is all about, “a bridge being a bridge to their friends, their families, their schools, their churches, to their communities.”

It’s more than filling the gap from one river bank to the next, he said. It’s about bridging the gaps of life, allowing people to access the things that matter. 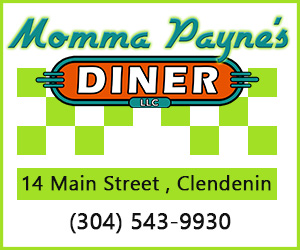