Where the Elk River Flows 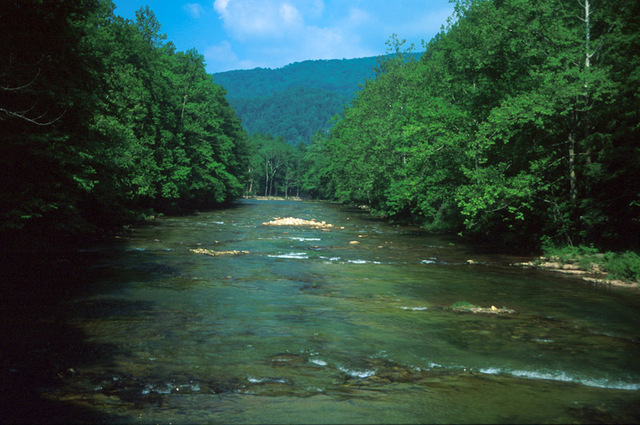 The Elk River meanders 177 miles from its headwaters in Pocahontas County westerly to its confluence with the Kanawha River at Charleston. The river flows through some of West Virginia’s most rugged and remote terrain, before finally reaching the state’s major center of population. The important tributaries include Holly River, Birch River, Buffalo Creek, and Big Sandy Creek. Other tributaries that drain areas of 50 square miles or more are Little Sandy, Blue, and Laurel creeks, and Back Fork. The Elk River watershed of 1,532 square miles accounts for about 6.5 percent of the territory of West Virginia.

The water quality of the Elk River basin is excellent, and the Elk provides drinking water for the city of Charleston and other communities. West Virginia American Water Company has plants on the Elk at Webster Springs, Gassaway, and Charleston, the last serving customers in Kanawha County and parts of Putnam, Boone, and Lincoln counties. Public service districts in Braxton and Clay counties obtain their water from Elk, as do the towns of Clay and Clendenin.

Upper Elk is a geological marvel: A subterranean network of caves, streams, and waterfalls, including a six-mile stretch in Randolph County where, in dry weather, the river sinks underground. According to legend, underground Elk was formed in 1896 when a hole opened in the stream bed and simply swallowed the river. Spelunkers frequently explore this dark side of Elk, but do so at their own risk because the headwaters are prone to sudden rises from storms that can fill the caverns.

The Elk watershed occupies the central portion of West Virginia. Eighty percent of the land in this basin of the Elk main stream is contained in Braxton, Clay, Kanawha, and Webster counties. Other counties within the basin are Nicholas, Pocahontas, Randolph, and Roane. Elk River begins as a trout stream, but for most of its length is a warm-water fishery, particularly noted for large muskellunge.

From its headwaters near Snowshoe Mountain Resort in west-central Pocahontas County, the Elk flows in a general northwest direction. At the Sutton-Gassaway area it bends to the southwest and continues this general direction to its confluence with the Kanawha River at Charleston. In 1961, the U.S. Army Corps of Engineers completed a multi-purpose water resource dam on Elk at Sutton, 71 miles below the river’s origin, creating Sutton Lake and taming the floods that had beset middle and lower Elk Valley residents for decades.

The elevation of the Elk at its source in Pocahontas County is approximately 4,000 feet. At Charleston the elevation of the river is 565 feet, making a total drop of 3,435 feet. Its average fall over the 177-mile course is 19 feet per mile.

The climate of the Elk River basin is humid continental, with generous, evenly distributed precipitation and a large yearly temperature range. Topographical features considerably modify the climate and result in large variations between the headwaters and the mouth of the Elk River, which are at about the same latitude.

Timbering, oil and gas drilling, and coal mining have been conducted in the basin for many years. The majority of the forest in the Elk River basin is composed of northern hardwoods. Agriculture within the basin is made up of numerous small farms.

The Elk River traverses the central heartland of West Virginia, covering regions little changed by industrialization and urbanization. Traditions survive here, the watershed harboring authentic mountain musicians, dancers, and craftspeople. Elk River was celebrated in a classic 1940 book, Tale of the Elk, written by W.E.R. Byrne, a lawyer, sportsman, and raconteur who fished and camped along the river’s length in the company of such colorfully named characters as ‘‘Bearskin Bill’’ Hamrick and ‘‘Squirrelly Bill’’ Carpenter. According to historian Roy Bird Cook in his preface to Tale of the Elk, the river’s name derives from the Shawnee designation as ‘‘river of plenty fat elk.’’