Brian Smith, by and through his mother Tina Smith, filed a complaint May 18 in U.S. District Court for the Southern District of West Virginia Charleston Division against Roane County Commission, county commissioners and county sheriff officials, alleging they violated the Fourth and 14th amendments to the U.S, Constitution.

CHARLESTON — West Virginia Attorney General Patrick Morrisey’s office has secured a $257,500 settlement against a door-to-door meat wholesaler, along with a court order that permanently prohibits it and its owner from engaging in similar business activities.

Members of the Attorney General’s elder abuse litigation and prevention unit alleged Thaxton Wholesale Meats LLC and its owner, Steven A. Thaxton, exploited elderly and vulnerable West Virginians. Both stood accused of coercing elderly consumers to purchase meat they could not afford and in quantities they could not possibly consume.

“No one should be pressured into buying goods they do not need at unreasonable prices,” Morrisey said in a statement. “This settlement exemplifies our office’s diligent work to protect the elderly, and all West Virginia consumers, from fraud or financial exploitation.”

A natural gas energy processor has agreed to pay a $610,000 civil penalty and install millions of dollars worth of equipment to reduce harmful emissions at hundreds of facilities across western Pennsylvania and eastern Ohio. END_OF_DOCUMENT_TOKEN_TO_BE_REPLACED

SPENCER – A mother is suing Roane County Board of Education after she claims her daughter was sexually assaulted on a school bus. END_OF_DOCUMENT_TOKEN_TO_BE_REPLACED

Nine months after the bridge into Elkview’s Crossings Mall was re-opened, four lawsuits for and against the owners of the shopping plaza have been directed to federal bankruptcy court.

As of this month, lawsuits involving the liability of Crossings Mall owners, their shareholders and their insurance company have been referred to U.S. Bankruptcy Court for the Northern District of West Virginia, according to court records.

A fifth and separate lawsuit, which the owners, Tara Retail Group, filed in August against the West Virginia Department of Transportation, was voluntarily dismissed without prejudice in March at the request of attorneys for both sides, according to court records in Kanawha County Circuit Court.

Tara Retail sued the DOT in August, claiming that the state was responsible for rebuilding the bridge to the shopping center that was washed away during the June 2016 flood.

Attorneys for the DOT argued that it was Tara Retail’s obligation to rebuild the bridge.

The bridge to Crossings Mall was reconstructed during spring and fall 2017 after its contractor, David Alvarez, of Applied Construction Solutions, agreed to pay for its construction up front, in exchange for being a priority creditor in the bankruptcy case.

Thomas said Tara Retail’s claims against the DOT were denied twice in circuit court, meaning a trial would be the only way for the company to assert its claim that the state was responsible for the cost of rebuilding the bridge.

“That means we would have to prevail in our case against the state, and then take that judgment to the [West Virginia Legislative Claims Commission],” Thomas said.

The process altogether could take years, Thomas said, and would be a distraction from Tara Retail’s bankruptcy proceedings.

To that end, attorneys for both sides filed a stipulation of dismissal on March 26 in Kanawha Circuit Court.

With attorneys’ full attention to bankruptcy proceedings, the remaining lawsuits related to the flooding at Crossings Mall were referred from the U.S. District Court for Southern West Virginia to the bankruptcy court in the Northern District of West Virginia, where Tara Retail’s bankruptcy case is proceeding.

The cases were referred to bankruptcy court after attorneys agreed that all of the cases have in common a significant amount of evidence and financial records that are at-issue in Tara Retail’s bankruptcy case before U.S. Bankruptcy Judge Patrick M. Flatley.

During a hearing on April 5, Christopher Schueller, of Buchanan Ingersoll and Rooney of Pittsburgh, said the cases were being referred to bankruptcy court to allow Flatley to make findings of fact and conclusions of law, meaning he will make rulings on certain evidence in the case before it goes to trial.

Once the pretrial issues are resolved, the intent would be to send the cases back to the Southern District court, where they would progress to trial.

Three of the cases will stay in bankruptcy court and progress as Schueller described. Flatley said during the hearings that the cases hadn’t been transferred to his court, as of April 5.

Those three cases include claims against the mortgage trust for Crossings Mall, collectively represented by U.S. Bank National Association. Wells Fargo Commercial Mortgage Servicing and Gold Coast Partners LLC, landlord and manager or the plaza, also are named as defendants.

One of the cases is a class-action lawsuit that involves people who suffered property damage at Crossings Mall or downstream from the failed culvert bridge and people who were stranded at the plaza after the flood.

A second lawsuit was filed by The Elswick Co. LLC, the holding company for Anytime Fitness at the plaza. In the lawsuit, the company seeks damages for loss of income and opportunity to continue operations, as well as expenses incurred while the business was closed because the bridge was out.

The third case was brought by an Elkview woman who claimed property damage from the failed culvert.

Tara Retail filed a counterclaim saying the association denied them $24,000, in January 2016, to replace the bridge, and that lack of support to replace the structure contributed to the damage caused by the flood.

During the April 5 hearing, Flatley gave attorneys a 21-day window to either withdraw a motion to refer the fourth case to bankruptcy court or to file a motion to have the case dismissed from bankruptcy court because the circumstances of that case weren’t similar enough to the other cases for it to be grouped with them.

CLAY — The state and the executors of an estate are suing the Clay County Commission, alleging breach of duty and violation of federal law. END_OF_DOCUMENT_TOKEN_TO_BE_REPLACED

In accordance with Code 11-8-14, as amended, the Council proceeded to make an estimate of the amounts necessary to be raised by levy of taxes for the current fiscal year, and does determine and estimate the several amounts to be as follows:

The amount due and the amount that will become due and collectible from every source during the fiscal year INCLUDING THE LEVY OF TAXES, is as follows: 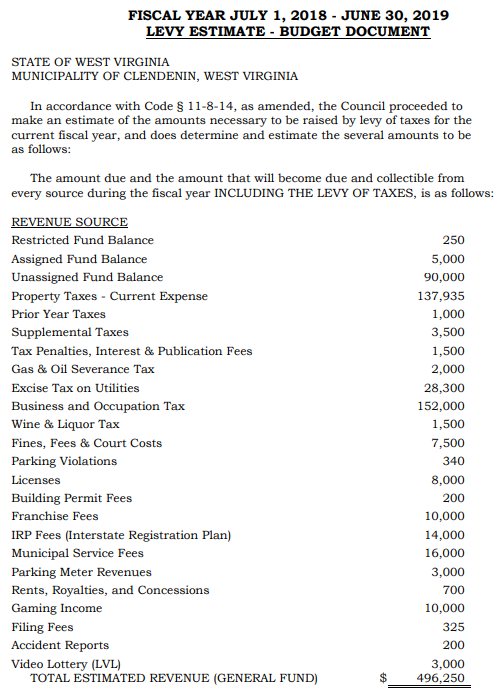 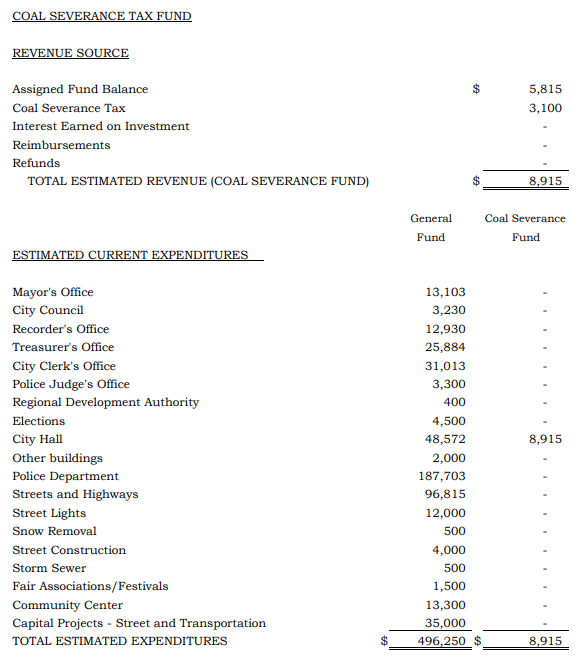 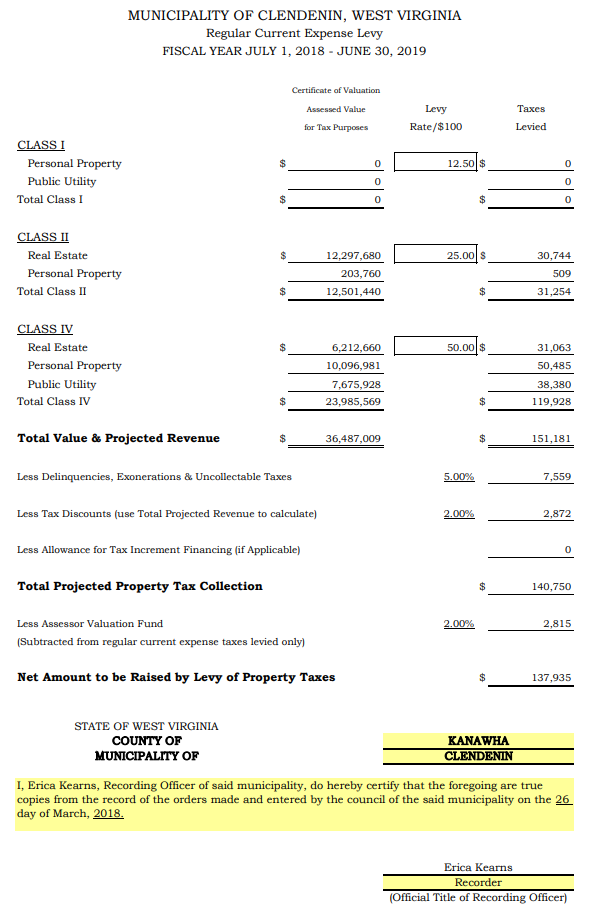 Bankruptcy court ruling a victory for all journalists, attorney says

CHARLESTON – A federal judge has ruled that a civil judgment against a Clay County man who attacked a television reporter is not a dischargeable debt in bankruptcy court.

Lilly pleaded no contest in 2015 to a felony charge of destruction of property. In exchange, prosecutors agreed to drop felony robbery and grand larceny charges.

On July 7, 2014, Aaron received a tip on a potential story regarding neglected mules and horses near a home on Bomon Road and went to report on the story. While filming, Lilly allegedly took Aaron’s camera tripod and attacked the television reporter with it. Aaron was injured and the lens of his camera was smashed.

Lilly shouted at Aaron to stop filming and to “head down the road,” according to the suit, however, when Aaron informed him that he was on a public road and would leave once he was finished with the video, Lilly attacked him.

As part of the plea agreement in the criminal case against Lilly, he agreed to pay $2,800 to WCHS-TV for damage to the camera and more than $2,000 in medical expenses for Aaron.

After the civil trial, Lilly filed for Chapter 7 bankruptcy on Dec. 20, 2016. Travis Griffith, Aaron’s attorney, says that was an attempt to avoid paying the judgment.

Soon thereafter, Griffith moved for summary judgment on the issue that Lilly “had acted with the prerequisite intent and maliciousness … to preclude the debt from being dischargeable in bankruptcy court.”

Griffith, who operates the Griffith Law Center in Charleston, said he considers this victory one not just for Aaron but for all media representatives working to inform the public.

“We, as a people, need to ensure the abilities of a free and impartial press to perform their duties to inform,” Griffith said. “This includes the right of a reporter to stand on a public roadway and inform the public on what he or she perceives.

“Walter Cronkite is noted as saying that ‘freedom of the press is not just important for democracy, it is democracy.’ Those who have taken it upon themselves to inform the rest of us should be able to do so without threat of attack from those who would choose to silence them.”