CHARLESTON, W.Va. – Since late June many residents in an area from Big Chimney to Elkview have experienced several tree-related power outages. Many of the outages were lengthy and most took place the first week of July, a period in which high temperatures and heat indexes helped produce a series of isolated but severe summer storms.

“We understand why people are upset about it,” said Chris Beam, Appalachian Power president and COO. “It’s not the type of reliability we aim to provide, it’s not the quality of service our customers deserve, but it is something to which we’re dedicating significant resources to make better.”

Beam explained that across its West Virginia service area Appalachian Power is implementing a cycle-based right of way maintenance program, where vegetation is cleared from along electrical circuits end-to-end every four years. Since 2014 the company has invested more than $190 million on its cycle-based vegetation management program, and is seeing an overall drop in tree-related outages of 32 percent on circuits that have been completed.

Tree clearing work began in 2017 on the Elkview-area circuit plagued by recent outages. Unfortunately most of the recent outages came from tree contact in areas still scheduled to be cleared.

“We still have about 40 miles of line to clear on this circuit and should have that work complete in September,” said Beam. “We are investing $1.2 million on this circuit alone to clear trees from power line rights-of-way.” Beam says while Appalachian Power can’t stop storms from bringing down trees, tree-related outages should drop significantly as a result of the work.

Appalachian Power has 1 million customers in Virginia, West Virginia and Tennessee (as AEP Appalachian Power). It is a unit of American Electric Power, one of the largest electric utilities in the United States, delivering electricity and custom energy solutions to nearly 5.4 million customers in 11 states. AEP owns the nation’s largest electricity transmission system, a more than 40,000-mile network that includes more 765-kilovolt extra-high voltage transmission lines than all other U.S. transmission systems combined. AEP also operates 224,000 miles of distribution lines. AEP ranks among the nation’s largest generators of electricity, owning approximately 26,000 megawatts of generating capacity in the U.S. AEP supplies 3,200 megawatts of renewable energy to customers.

As part of a large initiative to reduce outages on an electrical circuit from Big Chimney to Elkview, Appalachian Power is investing $1.2 million on this circuit to clear trees from power line rights-of-way. https://t.co/lMv0yDGTjD pic.twitter.com/A471IYtSYD

According to Appalachian Power’s outage map the outage started at 11:37 a.m. with an estimated restoration time of 4:00 p.m. As of 3:30 p.m. there are currently 595 outages remaining. Keep checking back for updates. 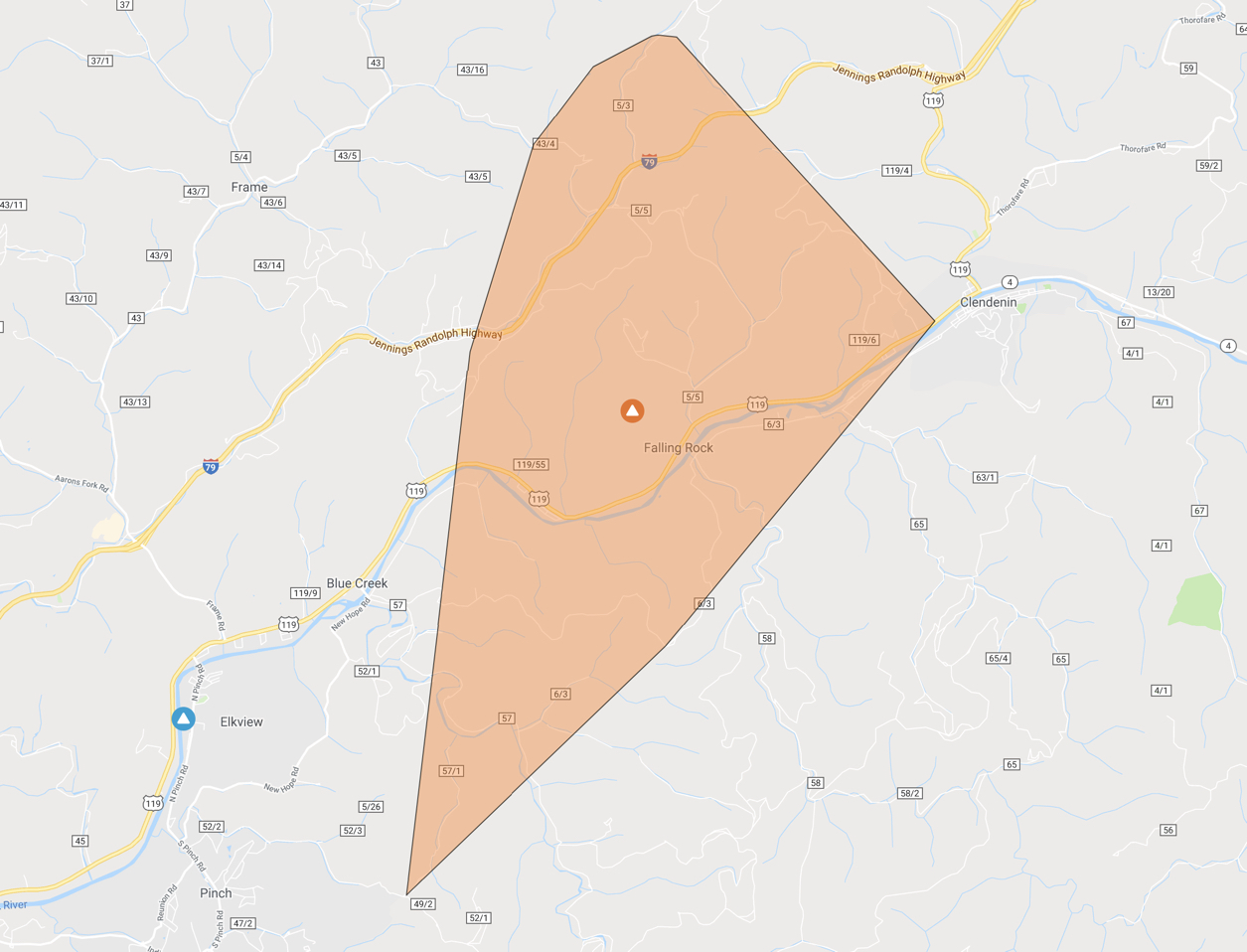 This outage comes on the heels of multiple outages customers have experienced in the Mink Shoals, Big Chimney, Elkview, Pinch and Clendenin over the past few days.

We are aware of the constant outages that have plagued customers in the Mink Shoals, Big Chimney, Elkview, Pinch and Clendenin areas of West Virginia for the past few days. We know these outages have been a nuisance, and we apologize to the affected customers. (1 of 2)

Our crews are working to fix the issues in the area and bring an end to the continuous outages. We will keep customers posted on any further updates on this matter. Thank you. (2 of 2)

The West Virginia Library Commission has presented $187,180 in state grants to 47 public libraries in the state.  The grants were awarded in June, based on facility, programming, and collections proposals from each library. The maximum award is $5,000 per library.

29 grants were awarded for facility maintenance, nine for collection development, nine for programming improvements, and 3 for other service enhancements.  Clay County Public Library was among those allotted funds, and received $5,000.

“These grants reflect the critical needs in West Virginia’s public libraries,” said Karen Goff, Executive Secretary of the WVLC. “They will allow libraries to improve their facilities, as well as enhance the programs and services they provide to state residents.”

17-year old Cody McCallister drowned on Thursday while swimming in the Elk River with some friends. This dinner is the second event that was held to help the family with funeral expenses.

“I can’t imagine the pain that a parent feels in having to bury their child, it’s the worse thing I can think of as a parent,” said benefit participant, Tony Brown of Hurricane.

In the first hour, nearly 100 people were served pasta, salad, and dessert. Dee Miller of Walton came out with her grandchildren and husband. She says she knows the feelings the McCallister’s are going through as she lost her nephew the same way.

“I have had family that has drowned before, and I really feel bad for the family, it hits close to home,” said Miller.

The Spaghetti Dinner Benefit went in the works just hours after Cody died. It was held a Momma Payne’s Diner from 11 a.m. to 3 p.m. Organizers said…

Locals Hit the Elk River In Honor of Elkview Teen

CLENDENIN, WV – The town of Clendenin finally had just the right conditions to host its first-ever “Paddlefest” earlier today. Roughly 30 people grabbed their paddles and hopped in their kayaks to take on the four-mile route.

The Paddlefest stems from the annual Clendenin Homecoming Festival, a time to celebrate perseverance and progress made after the June 2016 flood, however, a time to honor one Clendenin drowning victim.

Two days prior, 17-year-old Cody McCallister went missing in the Elk River. Later that night, crews pulled his body from the water.

The Paddlefest’s proceeds were originally set to be placed into the Homecoming Festival’s fund, but proceeds will now be donated to Cody’s family to help pay for funeral expenses.

CLENDENIN, W.Va. (WCHS/WVAH) — Friends and family gathered Friday night to remember the life of 17-year-old Cody McCallister, who drowned Thursday night while swimming with friends in the Elk River.

McCallister’s friends, family, and classmates gathered at the former Herbert Hoover High School parking lot to honor the teen who had aspirations of joining the Marines.

Cody McCallister’s family and friends are meeting in the former Herbert Hoover parking lot sharing stories and memories about him. One friend tells me Cody had just graduated high school and was set to leave for the Marines on July 16th. pic.twitter.com/TmWFpCt1w3

The vigil was organized by McCallister’s peers.

This vigil was organized by some of Cody McCallister’s close friends. Information on how to donate to help cover funeral costs is on our website, https://t.co/gLqggB15yU. pic.twitter.com/CkkjpQAgha

Cade Drake said Cody was like a brother to him and one of the most genuine people he has ever met. He said they did pretty much everything together, from welding to playing basketball. They even worked on Cody’s home together after it was damaged in the June 2016 flood.

Thursday night, the two boys and two other friends were swimming in the Elk River when Cade said he noticed…

Kanawha County deputies identify the teen who drowned while swimming in the Elk River as Cody A. McCallister, 17, of the Elkview area. (Photo Courtesy of Sherry McCallister)

KANAWHA COUNTY, W.Va. (WCHS/WVAH) — Kanawha County deputies released the name of a 17 year old who drowned in the Elk River while he was swimming with some friends.

The body of Cody A. McCallister was recovered about 11:20 p.m. Thursday was recovered from the river, according to a news release from the Kanawha County Sheriff’s Office.

#BREAKING: Kanawha County Sheriff’s Office has just released the name of the boy who drowned in the Elk River last night. His name is Cody McCallister. He is 17-years-old.

Metro 911 received a call about 7:30 p.m. that two males were in the Elk River and one male was requesting help. Members of the Clendenin Fire Department and the sheriff’s office were dispatched to…

Jessica Lynch sits down with 13 News Anchor Jennifer Abney to share how her West Virginia roots and lifelong friendships here in the Mountain State helped her to not only survive but thrive on her long road to recovery.

State impacted by bands of storms

CHARLESTON, W.Va. — Much of West Virginia is being impacted by bands of storms, bringing thunderstorms and heavy rainfall to areas already impacted by intense weather this week.

The National Weather Service issued a flash flood watch for a majority of the state as well as southwest Ohio for Thursday afternoon and evening. The watch has been extended to 1 a.m. Friday, due to concerns storms producing one to two inches of rainfall an hour.

According to the National Weather Service, similar systems will impact communities in the Northern Panhandle, Kanawha Valley, Eastern Panhandle and regions in-between.

Brian Smith, by and through his mother Tina Smith, filed a complaint May 18 in U.S. District Court for the Southern District of West Virginia Charleston Division against Roane County Commission, county commissioners and county sheriff officials, alleging they violated the Fourth and 14th amendments to the U.S, Constitution.